highly hypnotic as if a ghost is whispering in your ear. 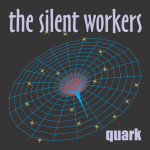